Before we get onto your latest venture with Grammar Studio, lets talk about how you two started out. Where did your career in the art and design industry begin?

Adam – Pretty luckily – for me – my tutor recognised I wasn’t cut out for the education thing, so when an old pupil of his (my first boss) called him with a job offer for a junior designer – long story short – I was in! I started working there at Design Junkie when I was 19 and I left there 8 (hard, but awesome) years later as a Senior Designer with experience in almost everything I can think of. That said, all the while I was focusing my spare time on a more ‘personal’ portfolio, away from the corporate branding world I was working in. Skateboards, apparel, sport, music industry stuff – that was the stuff I always wanted to do.

Peter – My path wasn’t as conventional as Adams! I finished University in 2008 and basically got a job as a gardener for around a year whilst I built up clients on the side, doing mainly gig posters and flyers for local pubs. A middle aged jobsworth at work was trying to get me fired so I saved him the hassle and decided to quit my job and go for a photo retouching job in London. I didn’t get it but I learnt a lot about the standard of industry down there and came back up north with renewed vigor. I took a leap of faith and became a freelance illustrator in 2010. I have been doing it ever since. 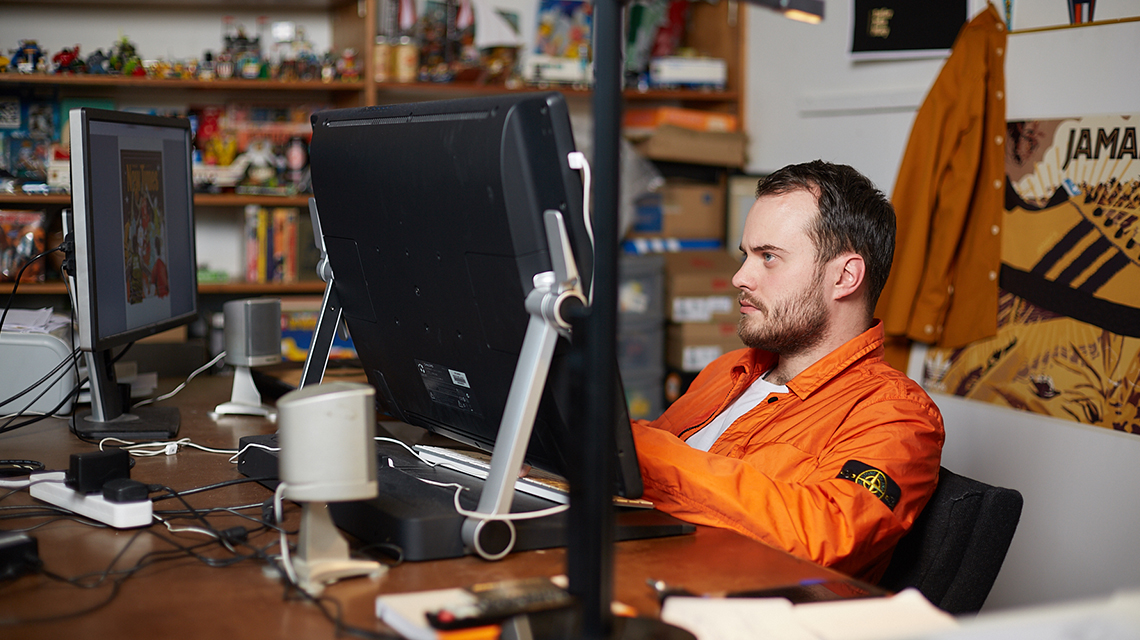 Was it anything specific that interested you in a career in the arts, or where would you say your interest came from?

Adam – Like I say, the skateboarding/extreme sports industry and the brands that were involved with that was mind blowing to me as a teenager. I would collect every magazine, flyer, garment that I could to soak it all up. I looked at the graphics on clothes that skateboarders wore, snowboards designs, surfing adverts etc, just thinking “It’s someone’s ACTUAL JOB to design this stuff!”

Peter – Yeh I was the same with the skateboard stuff! In 1999/2000 when the first Tony Hawks game came out there was a massive wave of skateboarding in England and I fully submerged myself in it! I wanted to design skate decks. That and record/CD covers. Unfortunately, by the time I actually had the skills to do it the CD had been replaced by a 1×1 inch square on iTunes. Designing those doesn’t really have the same effect!

What has been the most fun project that you have worked on separately?

Adam – That’s a tricky one…some of the best projects I’ve done haven’t been fun at all! I’m happiest when I’m being creative with typography, so anything like that.

Peter – Probably my work for Addict Clothing. It was a brand I aspired to work for when I was at art college. They gave me a call out of the blue pretty much the same year I went freelance so to say I was ecstatic was an under statement. Looking back the work makes me cringe a bit as I would have approached everything a whole lot differently in hindsight, but it was great working with those guys and it gave me great belief in what I was doing was right.

How did the two of you meet?
Coolest meeting story, ever: At a talk by Huddersfield design-God, James Somerville, co-creator of Attik.

I know you both have your own projects, so how did the idea for Grammar come about?

Adam – Pretty much the day after that initial meeting, we met up, hung out, spoke about the stuff we were into (which was like, 90% the same), spoke about what we wanted to achieve with work, spoke about ways our skills/styles could work together. Then, I guess we just acted on it…probably because we were both really excited to see what the outcome would be.

Peter– As soon as I met Adam and saw his work, for me it was like the missing link to what I was doing. I lacked the professional finish, the typography, and the formatting. Adam was the guy who provided all that and we work really well together. 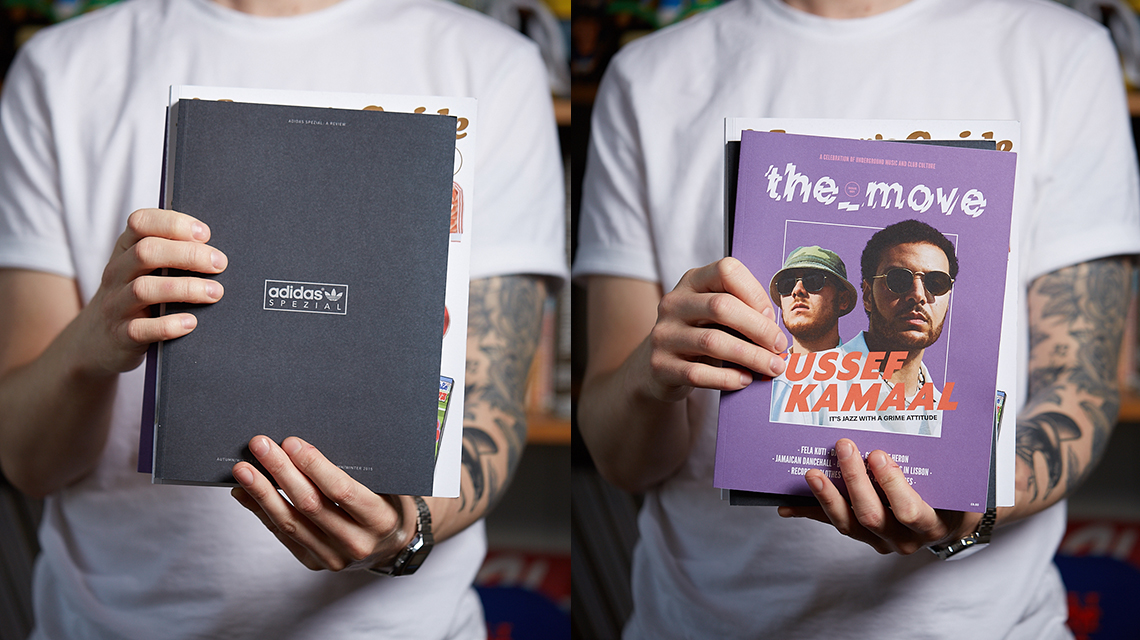 What do you think makes Grammar unique to other studios?

Adam – Lots of things, I think, especially to other design companies around here or even in the UK. I don’t mean that with any disrespect, but naturally – with our personality – I think we are more like a design agency from Brooklyn or LA, rather than one in Leeds or London. We’re only ‘young’ as a studio so who knows what will happen, but we got to the place we’re at now by being ourselves, letting our ideas guide our work – not trends/the industry, and just trying to approach any job we do with excitement.

Peter – We like to call ourselves a ‘boutique’ agency – without sounding too hipster. We are in a lucky position to be able to pick the jobs we really want to work on and maintain our integrity doing so. We haven’t forced the studio, it has all been a natural progression and continues to be. The more we started working together, the more I just started pitching things to my existing clients. So instead of just saying “I can draw this”, I was saying “I can draw this, but WE can build you a website AND do you a promotional magazine AND do you an animation etc.” and people started going for it.

How would you explain the approach to design that you take at Grammar?

Adam – I’m not sure we have a ‘radical way’ of approaching work – we just try to do the best job that we possibly can. And, we want to enjoy it. As mentioned before – if something comes along that we don’t feel enthusiastic about, we say “How do we make this exciting?”, and I think that comes across in our output.

Peter – I think with us both been from different design backgrounds we both have a unique view of things. How things should look, and also what we don’t like about what other people are doing, and basically proving we can do it better. We put our solo experiences and expertise together and I feel we have a bit of a different take on things as a whole. That’s my mantra anyway.

Would you each say this differs from your own personal approach?

Peter – Not at all, its just an extension, like when a power ranger turns into a spirit animal!

What or who was the biggest influence for Grammar?

Adam – Soooo many influences. Everything from the Bauhaus to Peter Saville, The Designers Republic to ‘RUGGED’ magazine (RIP) by Carhartt.

Peter – I always wanted to model our studio on the likes of Morning Breath Inc and ILOVEDUST, not necessarily the style but the types of jobs they do, that and they have really cool studios!

What type of project or brief do you enjoy working on the most? And why!

We will always enjoy working on apparel graphics. But, lately we have been getting a lot of enjoyment from the photographic side of campaigns/editorials/marketing materials etc. I suppose that is a good example of us as creatives and our ideas growing.

And on the flip side of this, what projects and briefs do you find the most challenging? And why!

Branding is always challenging. When it goes right it can easily be the most fun part of the job, but there’s a lot of great branding out there, these days – to create something that needs to tick so many boxes AND be aesthetically pleasing for a client is not a walk in the park. But I suppose that’s what gets us kinda people out of bed in the morning.

Is there one project that stands out for you both since staring Grammar as the most significant?

Peter – Two really stand out for me, the first one we worked on was a local ice cream company, Dixons Milk Ices. It was the perfect job for us, a local tour de force! We got to design vintage style graphics and it is still one of my standout jobs. The other one would be the adidas book/shoe we did. It was early on and clients don’t get much bigger than those guys. Once that project was done I felt confident we could deal with big clients and it only gave us more strength as a team.

I also see you have worked on a lot of football projects, are you both football fans yourselves? Who do you support?

Peter – Yes, we are both sports fans in general but football is top of the list. I’m Huddersfield Town through and through. I’m still not sure why Adam supports Manchester City, but I don’t hold it against him.

Adam – Yeah, believe it or not they were once a gritty, underdog-kinda-team, that resonated with me. I like light blue, too. 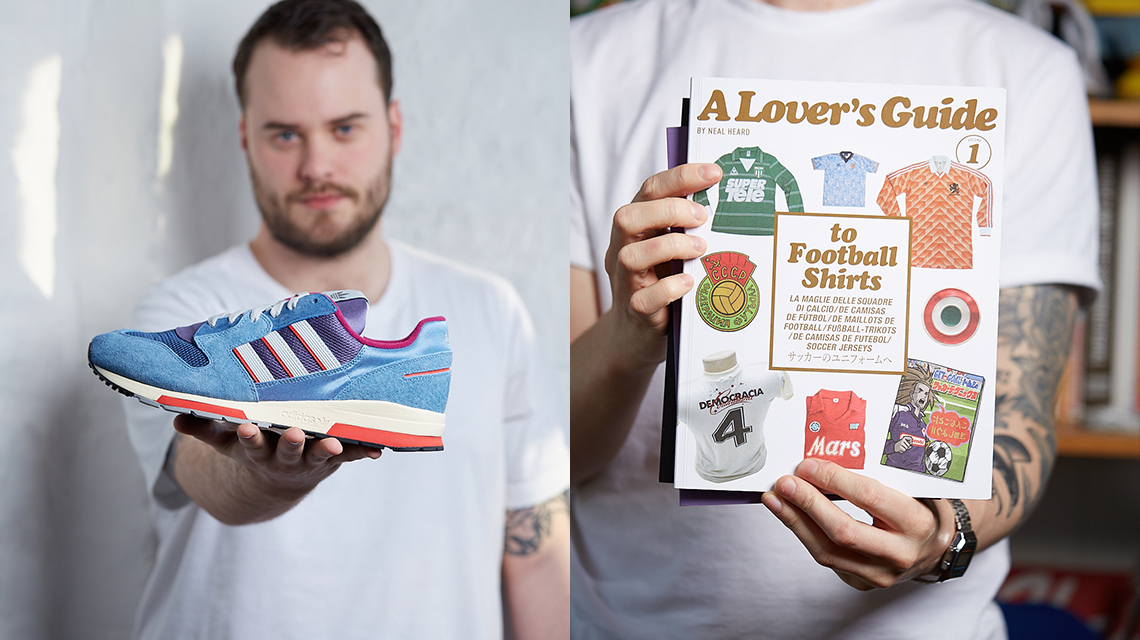 What would your best piece of advice be to young designers out there?

Adam – Well, firstly – there’s more inspiration in the world than what’s on the internet, get out and find it. Secondly – learn the rules of design, so you can break them properly, haha.

Peter – Get your head down and crack on. Be punctual, be modest. You will get out what you put in, there are no shortcuts.

And finally… tell us some more about any upcoming projects we can look out for!

Just this month we are working on apparel for Duffer and Ellesse, we have done a spring campaign for Pretty Green, we have the new issues of Proper Mag and The Move on the way, and we have just taken the reigns of ‘Off The Rails’ magazine, regarding their branding and magazine design, very cool.
You can follow Grammar studio & the boys by the following social media links below: