A celebrated multi genre singer songwriter that has toured extensively across the UK, Europe, USA & China had his music featured on UK & US television is the owner & founder of chocolate fireguard records with a fierce loyalty to the West Yorkshire Music scene. An activist / campaigner within both the Hands off HRI & The Love Music Hate Racism Movements…The man truly is a creative behemoth. 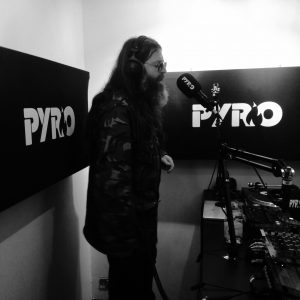 Hi there Pat hows things, thanks for taking your time out to answers some questions , so what have you been up to recently?

Nice one and thanks for the interest. More of the same, ducking, diving, jabbing, weaving … coupla collabs here and there ha ha

Tell us about your background, are you originally from Huddersfield (West Yorkshire) where did you grow up?

School especially choirs. We had music at home but a lot of that was regional accordion music from my old man’s village, not the kinda stuff that your mates would view as cutting edge or cool.

Can you tell us a bit about your musical influences, who do you love musical past and present?

You’re quite the collaborator aren’t you, You’re a singer songwriter in your own right as well as the well-known & respected band Kava Kava, you’ve pushed the envelope with your work in the Drum & Bass scene with Hospital Records and have been describe as one of the biggest vocals this side of the Atlantic, how did your relationship with Hospital records & the D&B scene in general come about?

I’m old enough to remember Roni Size receiving a Mercury Award for New Forms! I was like what is this fine music from outaspace !? Bought it and soon after that Goldie’s Timeless. Diane Charlemagne’s vocals blew my mind and it was amazing a few years later to actually duet with her (on a house record c/o Ralph Lawson). I think the first dnb tune i was involved in was a collaboration with Acetate for Emotif Recordings. I played the riff in on my trusty Roland Juno 106! John Peel played it on Radio One too but it took a few more years before I ended up singing on the genre. No word of a lie this came about getting drunk with Hospital A&R Chris over in Shanghai – I subjected him to a few hits like Britney Spears and he promised to contact me when we got back to England. He did and I ended up recording the Nu:tone Beliefs single at Hospital Records studio. From then on I’ve been singing on dnb releases ever since – a couple of singles for Austrian crew Camo & Krooked who headlined Leeds Festival like “All Night” and “Turn Up The Music”, a few bangers with artists like Teddy Killerz, Technimatic, Vanguard Project, Dexcell on labels like Ram, Shogun, Spearhead, folks like Keeno, Logistics, London Electricity on Hospital Records …… Check out my youtube and spotify for playlists of this gear …….. https://www.youtube.com/watch?v=MUZqbF3p3QM&list=PL7ABE203C923E5D4B

Has there been a significant moment or track, which you feel has really defined your journey with music to date?

Tricky one. Worn a few hats! I was pretty blown away getting Kava Kava songs into big US TV series like “Weeds” “John From Cincinnati” and “Dirt”. Got to tour the States off the back of that.
Also hearing my voice closing a Celebrity Big Brother series c/o a Camo & Krooked tune was pretty surreal ………

Dead of alive who would be your ideal collaborator?

What do you want listeners to take away from your music?

Depends what genre to be honest. With Cabinet of Millionaires I’m trying to get folks into the issues, with drum n bass more often its about having a banging time in a club ……..

You’ve been quite involved in activism for quite some time haven’t you, Working with the Late Tony Been up until the current hands of HRI & Love Music Hate Racism campaigns, what motivated you get involved in causes like these?

Let’s face it there’s so much bullshit going off in this world. I like projects that create positive change. The music biz has always been a bit me me me self self self interest (this social media era can be painful to watch ha ha) so its good to do something that instigates positive change, especially if it uses music in a positive way. Working with Tony Benn was amazing. Not only was i involved in a track with him but i got to pull a compilation CD together against the introduction of tuition fees (at a time the heads of the NUS were in favour – yes – let that sink in) and we (the Campaign For Free Education) ended up launching the CD in Westminster! There were some pretty big 90s bands on that CD……. 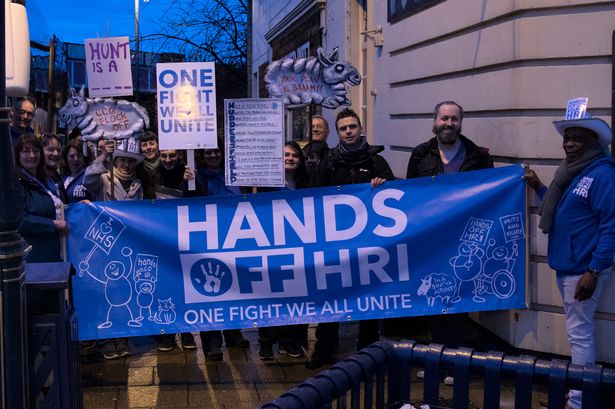 It’s great you mentioned the HANDS OFF HRI campaign. Ridiculous to think we might lose our A&E services and Hospital to Halifax. A Town as big as this. Glad to have gone to Westminster and Leeds Crown Court with these hard working activists. Amazing result winning that judicial review at Leeds Crown Court. More infos: http://handsoffhri.org Another local campaign i’d like to big up is Save Cemetery Road allotments. Check this news piece for more infos. https://m.youtube.com/watch?v=XpZLEtxvXjc

In the past I’ve approached a lack of local music biz opps in the same way. It’s a struggle but its been ace to push out a few regional compilation CDs and help loadsa bands out. Been lucky to have visited at a few international music conferences over the years with bands / labels etc and it was obvious there was loads going off from other regions and nothing from Yorkshire. So for a few years, on a really daft shoestring i put on an all Yorkshire showcase at SXSW over in the States c/o the British Music Embassy venue. Sadly the whole thing was unfunded and downsized and there’s now a “Northern Powerhouse” showcase where once the Yorkshire one proudly stood – hardly any Yorkshire acts (face palm) but it was great while it lasted. Win some, lose some …..

Every once in I while I put out some overtly political sounds too. Check out Cabinet Of Millionaires for more of that gear. CoM have a set at the forthcoming Love Music Hate Racism gig in Huddersfield 15 June 2018. The gigs have been wild. One was even outside Tory Party Conference!

So on the 15th of June your label is holding the “Love Music Hate Racism” at Northern Quarter event kicks off… what genres will be represented, what artists can we expect to see & hear on the night?

Its diverse. I’m looking forward to the soul electro vibes of The Winachi Tribe, Savvy ft The Real Demo and Goatstar (or course), Logan and Manley (kinda acoustic reggae), spoken word from Lisa Luxx, Silverfinger Singh (hip hop) a debut from Camo and LS Beats – Cameron actually acted in the Cabinet Of Millionaires video for “Serve Me” and he’s gonna perform his debut single. Last two hours or so will be a Drum and Bass Against Racism set with myself, local legends Promo and Holsta of Future Formation and Mr M from LMHR. Fresh Kids are doing some live Love Music Hate Racism graffiti outside the venue too and we’ll have some speakers from LMHR and Stand Up To Racism too 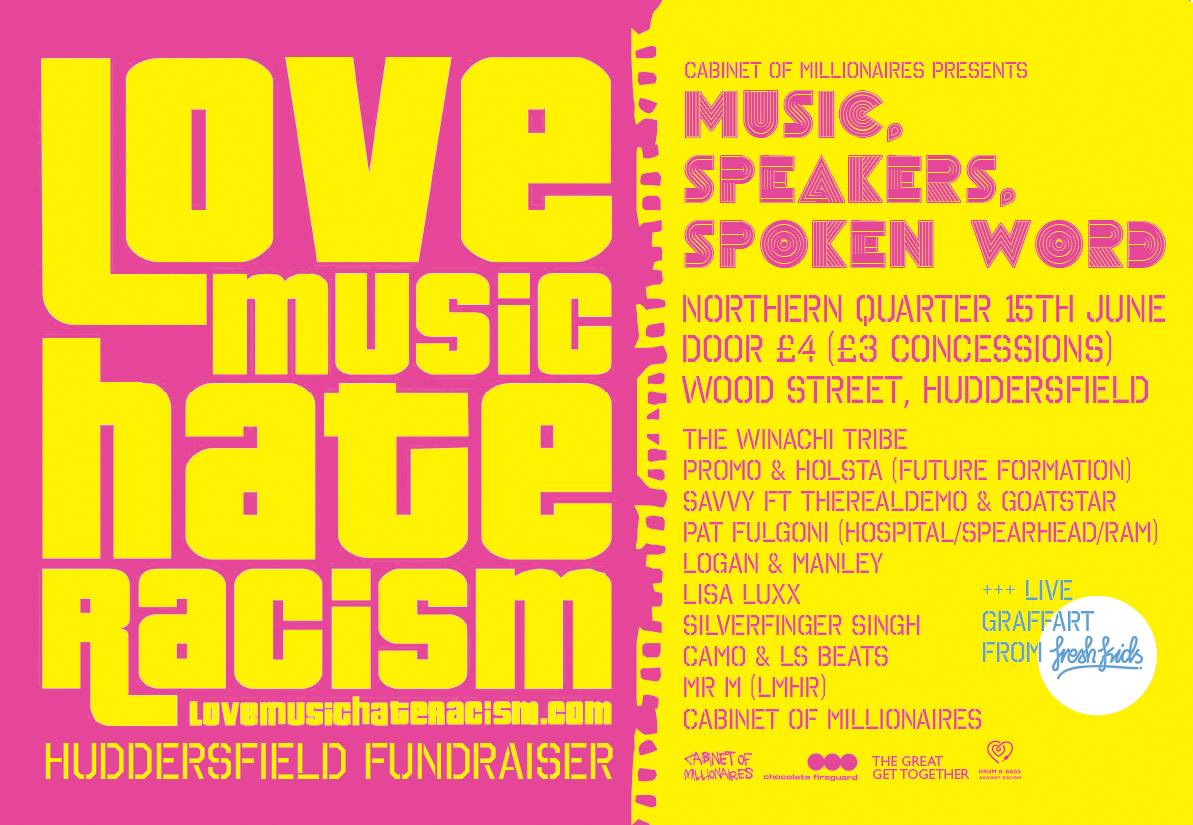 What inspired you to hold an event like this?

This particular event happened when Love Music Hate Racism organisers stopped off in Huddersfield on the way to meetings in Scotland and popped in to see us at the label. Windrush, Grenfell, Gaza, Syria ….. I find unjust situations like these really very upsetting. How is it that we can bomb countries and fail to take our quota of refugees. Such bullshit. We are are one of the richest Countries in the world and need to do better than this ffs. Campaigns like LMHR are needed now more than ever. Having played a few of their benefits over the years including a great one over in Manchester with Mr Scruff it’s great to get a LMHR benefit together locally especially on the 2nd anniversary of Jo Cox’s tragic death.

Right random head scratching question. If you could travel back in time and chat to a 10 year old Pat Fulgoni, what would you say?

Get a manager. Oh and I’d pass on a few historical facts so i could turn up in a cape and interfere Back To the Future stylee 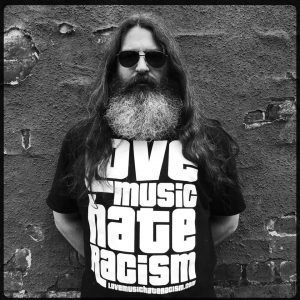 What are you currently working on? Are there any plans for new release anytime soon?

Firstly my second collab with liquid dons The Vanguard Project – this time for Dutch label Fokuz. I co-wrote and sung “Still Together” from the “Identity Crisis” EP which recently managed to get in the Top 5 best selling drum and bass charts on Beatport so that can’t be bad… Secondly the long awaited remix EP from Spearhead Records trio Dexcell. I worked on a couple of tunes for last year’s album “Under The Blue” and one of them “Scattered Memories” was expertly remixed by Technimatic.

Got a few things on the go at the moment across a really diverse range of genres from rock, broken beat and dnb.

Also on a local Huddersfield tip, Marsh Festival approached me to see if I’d pull a blues band together for this summer’s event. They’d seen some footage of me blagging the blues on Czech TV and I’m excited to be pulling a new blues project together … you know old school stuff like John Lee Hooker, BB King, Ray Charles, raw guitar orientated blues. It’ll be a grin …..

I’m also putting the finishing touched to a body of my own productions. Kinda downtempo, rock, electronica with Fulgoni vocals. Received some killer remixes for this gear too………

Ooh you a busy boy then, just as expected, Well thanks for your time great speaking to you, finally where can people find out more about you and your music