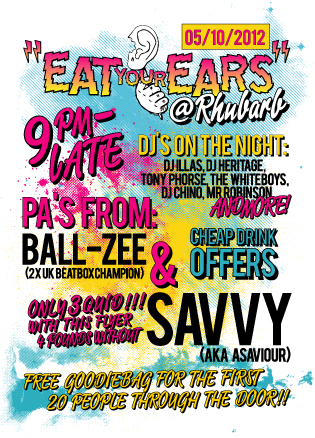 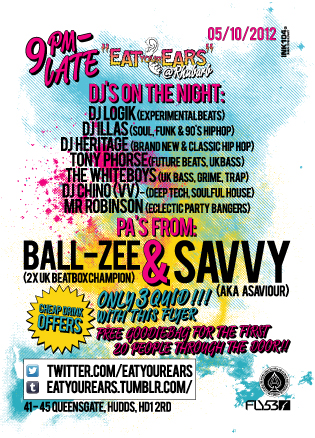 SAVVY
Saving Grace’s own, Huddersfield born hip-hop artist and impresario Savvy, has cemented himself as one of the strongest hip-hip artists in the UK and will grace the stage at Eat Your Ears this October.

The imagery, colloquial wit and the clever twists and turns in which he delivers his sound sets him apart from some of his more traditional peers and has resulted him receiving widespread acclaim from national & international DJ’s and publications.

Setting up Saving Grace Music in 2007 led Savvy to be part of one of the biggest releases of his genre in 2009; The A Loop Theory alongside DJ IQ (Professor Greens Tour DJ). Q Magazine, Metro, DJ Mag, Front and other UK publications as well as a large number of International Publications gave the LP outstanding reviews and allowed Savvy to set the scene for promoting just what is great about Huddersfield and the music alike.

His expansion continued body of work shows again the immense artistic vision and growth which has allowed him to work with artists like Athlete, Jehst, Stac, Akira Kiteshi, Totally Enourmous Extinct Dinosaurs , Tape the Radio, and Bloc Party to name a few.

BALL-ZEE
Who says you need an instrument to create music you can to do what Ball-Zee can, without?

Ball-Zee is set to tear up the stage at Eat Your Ears this October with his outstanding ability to create heavy beats, realistic sound FX and deep, dirty base lines using only his mouth and vocal chords. After holding his title as a Northern beat-boxing talent for three years, it is no wonder that he is now two times UK Beat Box Champion (2011 & 2012), Emperor Of Mic 2012 and stormed his way through the notoriously tough Grand Beatbox Battle, in Basel, Switzerland, to become champion this year. Aside from his solo work, he also lends his talents to Extra Curricular’s live shows; a hip-hop/soul group formed in Huddersfield.

DJ ILLAS
Rory ‘Illas’ Hillas will be bringing Eat Your Ears some classic hip hop anthems when he takes the stage in October.

DJ HERITAGE
Huddersfield’s own Paul ‘Dj-Heritage’ Heraty will be bringing us bang up to date at Eat Your Ears with the latest in current hip-hip party tracks – getting us in the mood to dance until the early hours of Saturday morning!

TONY PHORSE
DJ & Producer Tony Phorse has had plays on both Rinse FM and Passion FM and will be taking Eat Your Ears back to the future with prospective beats and the best from UK bass.

THE WHITEBOYS
The Whiteboys are coming to Eat Your Ears with a massive mix of Grime, Trap House, Funk and Garage. With regular slots on the radio already you can catch them before the event and get in the mood.

DJ CHINO
Mr Vv aka DJ Chino will be providing Eat Your Ears with the best in soulful, deep ,tech and tribal house mixes. Oh, but hs isnt just a great DJ, he is also head honcho at one of the North West’s leading independent fashion labels: Vinyl Vandals which was set up in the early 90s from a few youngsters who were passionate about music, fashion and having a good time.

MR ROBINSON
In his own words Lee Roy Robinson has been Mr Robinson as far as he can remember but it was in 2009 when he began DJing and producing under his alias. He boasts a huge back catalogue of work and was a regular at Huddersfield’s award winning Afterparty where he played alongside some of the biggest names on the scene: Jack Beats, Laidback Luke, Krafty Kuts, Doorly and The Squatters. Some of his remixes include Saving Grace’s very own Savvy (While The Water Falls) and Adele’s Rumour Has It.

Don’t forget the first 20 people though the door get a free goodie bag. 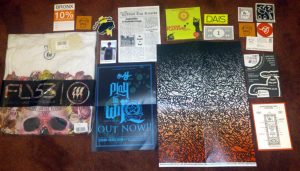 To find out more checkout our facebook page here.

Get ready to Eat Your Ears